I figured that if I get into the habit of doing weekly updates, it’ll force me into some measure of discipline about things, and there’s no way that my goal to read 20 books and lose 20 lbs in 2013 will work if I don’t have some discipline about it. So, here’s an update…and if you’re playing along at home, feel free to comment below with YOUR updates. This game’s open to anyone who wants to participate, although you should only set goals that work for you. My goals work for ME because I set them. And, while it should go without saying, I can’t let it go: don’t set ANY weight loss goals and/or exercise without having talked to your primary care physician first. I’m not a doctor, I don’t play one on TV, and I don’t have any designs on being a doctor. On the plus side, you don’t need to talk to an English teacher before you set your own reading goal…so, that saves you at least one phone call.

20 books: still on book #1. Okay, it’s not a ton of progress, BUT it’s still only the second week of the year and, to be fair, it’s Charles Dickens. It’s not like I picked the standard beach read. I will say that the story of “A Tale of Two Cities”

is a pretty amazing book so far. It’s a slog, much as Neal Stephenson’s “Baroque Cycle”

was, but if the payoff is half as good as what I got from Stephenson, then I’ll probably come out a Dickens-lover. We’ll see. Some days, I really love having a chewy read. Other days, I just want something mindless that I can breeze through without thinking. The next book may be something a bit more lighthearted…lest I weigh myself down (no pun intended) with too much depressing material.

20 lbs: hard to say, but I clocked in on Sunday AM at 221.4lbs. Not knowing where I was on January 1st (primarily because of a near-pathological fear of what the scale may say), I’m using that as my starting point. This means that I should be ending the year no higher than about 201lbs. It’s still far away from where I want to be, but every journey begins with a single step…and every weight loss begins with a willingness to admit that you NEED to lose weight. When I go for my physical in a few weeks, I’m hoping that I will be back down to where I was when I went last year; it would be disappointing to have to come in higher than where I was back then.

I haven’t yet gotten my exercise program in order; dh and I still need to sort out a schedule that allows us both to work out in an equitable fashion. He has all of his triathlon training and conditioning to do, and I know he doesn’t get as much time to do that as he wants. I haven’t yet set aside any time, and that has more to do with my lack of interest in losing any sleep than anything else. There isn’t a ton of time in the evenings for working out yet, but we can get back to alternating days when we do kiddo pickup & dinner in order to make it work. We just haven’t gotten back into that groove yet. Having two drop-offs in the morning and two pick-ups in the evening really has thrown us off a lot more than I expected.

So, what have I done, then? Well, I’m not being a complete schmoo. Last week, I started participating in the #plankaday challenge – the brainchild of Dr. Sherry Pagoto, a licensed clinical psychologist and Associate Professor of Medicine at UMass Medical School. She started the Plank A Day Revolution as a way to get people to make small change. All you have to do is perform just one “plank” per day. It’s great exercise for your core muscles, and you can do variations on it to give yourself more of a challenge. The basic move looks and feels like a pushup, except that you keep your forearms on the floor. I’m up to about a minute before my body is shaking enough that I feel like I need to take a break. It seems like the majority of folks who participate on Twitter tend to add the picture snapped from their phone of the timer, so that’s what I’ve been doing. 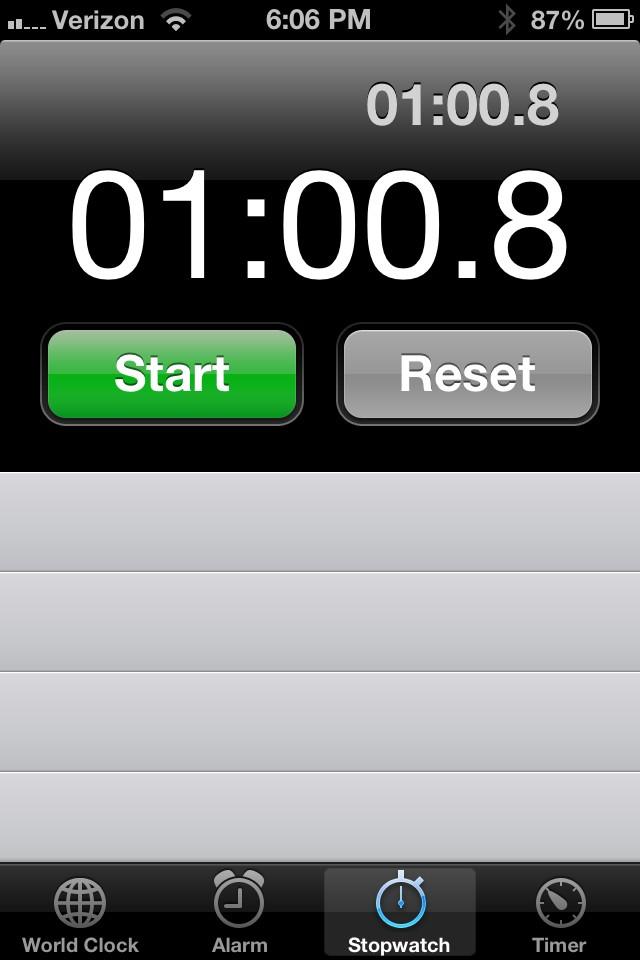 If you want to join in, feel free to give it a shot! Just make sure you are up to the physical activity and talk to your doctor and yadda yadda YOU KNOW THE DRILL BY NOW. Make sure that you use the hashtag #plankaday on your tweet and expect a visit from the Plank Police if you fall off the wagon for a few days. You can even get a plank penalty if you’re behind…so make sure you’re able to keep up!

Also, massive props on this to Elizabeth Comeau, the author of the Get Moving blog and a driving force behind the @BeWellBoston Twitter account, as well as RadioBDC. She celebrated her one year blogiversary on RadioBDC earlier this week, which is a pretty awesome milestone. If I didn’t follow RadioBDC on Twitter (and listen to them during the day), I wouldn’t know about Elizabeth’s work and wouldn’t have caught on to #plankaday, much less been bitten by the bug to participate. Elizabeth talking up #plankaday on RadioBDC and Twitter inspired me to give it a shot, and I’m glad I’m doing at least something until I can do more. See, radio will save us all…or at least that’s my hope.

Direct to your Inbox: